This is another “Encounter” to go into the collection above. It’s also likely to eventually end up in my memoir. 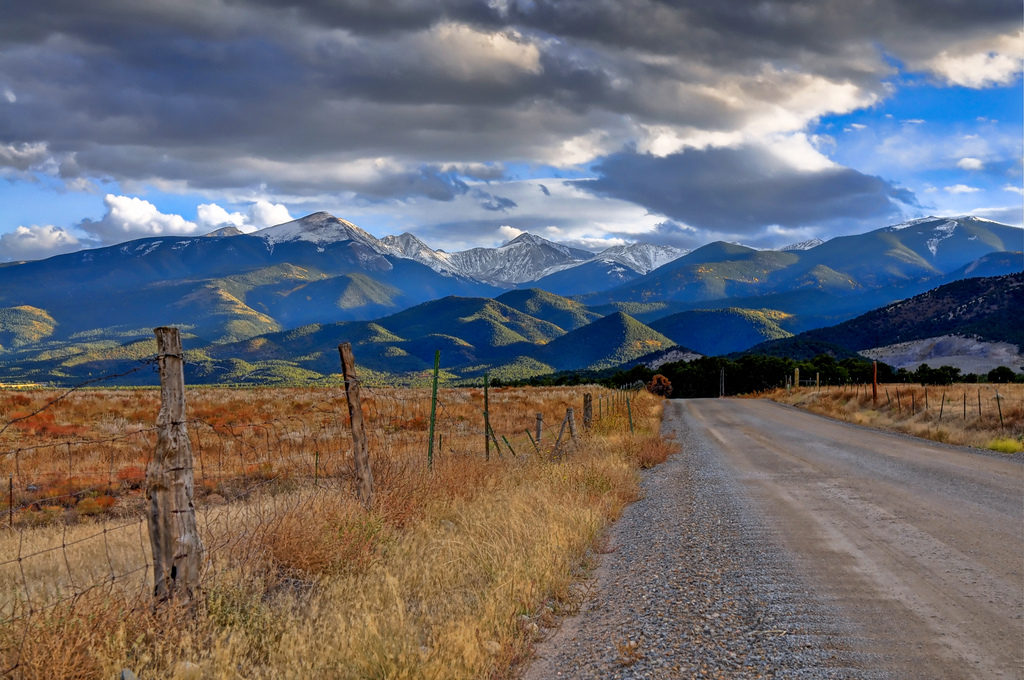 I’d always been fascinated with the Penitente Indians — Native Americans said to be indigenous to Mexico who converted to Christianity.

Isolated in the sparsely inhabited reaches of Northern New Mexico the Penitente developed their own austere form of Catholicism, noted for its ritual reenactment of the Passion of Christ on Good Friday. A procession of flagellants whipping and scourging their flesh, blood streaming down arms and torsos, accompany a young man chosen to carry the cross that year. The ritual is said to culminate in an actual crucifixion using sterilized steel nails. Thankfully the guest of honor is taken down from the cross before he actually dies.

When the mainstream church sought to interfere in their practices the Penitentes evolved into a secretive, mystical “Brotherhood.”

In the fall of 1968 I was hitchhiking around the Southwest, circling through Hopi and Navajo country, past false-front cowboy towns, through dusty barrios and along city streets of neon and concrete. Stone “Hoo Doo” people, embedded side by side in the rock walls of mesas like guardians carved in the pillars of Egyptian tombs, gazed down impassively as I went back and forth through Utah and Arizona.

I slept under freeways and bridges, in dry river beds beneath a star-strewn sky, and on park benches and picnic tables. Occasionally I was taken in by friendly people looking to get high with a real hippie, or if I got really lucky — a lonely woman to lie with in a darkened bedroom.

I was a prototype for the legion of homeless wanderers who would follow in the years to come — wild-eyed madmen wrestling with personal demons on city streets and roadsides. It was one long meditation, sometimes spent actually sitting cross-legged beside streams or in mountains. I stayed for a short time in an old mining cabin beside a small creek winding through a meadow high in the Colorado Rockies where I awoke in the morning to little chipmunks perched at the foot of the bed seeking handouts. For a few weeks I worked pitching hay bales on a ranch.

Finally I ended up in Penitente country north of Taos, hitchhiking on a back road across an elongated plateau, with the range of Sangre de Cristo Mountains holding up the sky to one side. A series of short rides took me through tiny settlements of scattered adobe houses, with old pickup trucks rusting under bare trees and dirty faced little kids staring wide eyed at the long haired bearded stranger going past, dressed in a tattered corduroy sports coat and bluejeans. It’s already October and the wind has a sharp cold edge to it.

Dropped off late in the afternoon at a desolate crossroads just south of the Colorado border, I gazed up apprehensively at the mountains slowly disappearing into ominous clouds and the sky growing darker. The main road, devoid of traffic and eerily empty, stretched out straight in both directions. Away from words and images to echo my feverish thoughts, my mind too was empty and calm.

After a few hours without a single vehicle driving by, I realized it’s not only getting darker but much colder as well. Thin layers of icy snow started flying across the deserted roadway as an early blizzard blew in from the Northwest.

Far off in the distance a lone light flickered in a ranch house. My mind flew across the expanse of barren landscape and for a brief instant I was looking out through the eyes of a woman sitting inside by the fire.

The temperature dropped precipitously and low drifts of snow began to accumulate in a ditch by the roadside. Surprisingly, I didn’t feel cold. In fact I wasn’t feeling anything, except an overwhelming urge to fall asleep. The vision of a long dark tunnel opened up before me, with a glorious golden light at the end of it.

Just as I was getting ready to lie down in the snow by the side of the road, a baby blue and white ’55 Oldsmobile hardtop, exactly like one I once owned, pulled to a stop in front of me. For a moment I thought it might be an hallucination, but as I stumbled forward I saw three Indians, black hair and weathered faces under battered cowboy hats, staring expectantly at me. The door opened and they beckoned for me to get in the back seat.

As we rumbled off down the road they handed me a bottle of sweet red port to drink from, followed by a partially gnawed head of green cabbage to chomp. The port, a wine that I’d never tasted until then, warmed up my insides as it went down. It’s been a favorite of mine ever since — as is cabbage, which I prefer cooked, but tasted pretty good raw.

After a few pleasantries I discovered my saviors were Penitente Indians. They seemed pleased when I told them I’d always wanted to meet genuine Penitente. Once across the Colorado border we pulled into a big truck stop at a busy highway intersection. By then a cold rain was falling.

My companion in the back seat offered to buy me a drink at the small tavern nearby. As we sat at the bar drinking whiskey and beer he told me he’d always wanted to meet a genuine hippy. “You look so much like Jesus,” he crooned while gently stroking my long hair. He said he’d taken LSD a few times and that I could stay at their place nearby and take it with them. The thought occurred to me that maybe they wanted to fatten me up for the “Ritual” in the spring. Although flattered, I wasn’t sure I really wanted to go there.

I downed my drink and thanked them for their kindness but said I really had to be on my way. They looked on with bemused expressions as I backed nervously out the door and quickly hitched a ride on a big rig truck going west towards Alamosa and Durango.

I’ve since read that dying of hypothermia (low body temperature) is actually quite pleasant, like falling peacefully asleep.