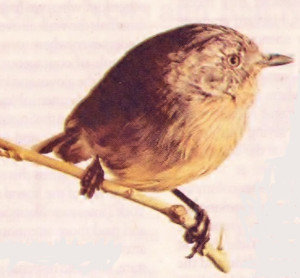 Not long ago I found a small brown bird perched on the step at the back of my house. Just sitting there. It didn’t fly away, even when I reached down and gently picked it up.

Small and remarkably round, the bird fit nicely into the palm of my hand. It was still alive, but appeared to be unconscious. I figured it must have flown into the glass door, thinking it could fly straight through the room and out the window on the opposite side of the house — the same way these little birds zip through the thick brush outside.

My examination of the dazed bird was interrupted by a commotion in a large rhododendron bush behind me. It was another bird, sounding very agitated. Although I couldn’t see it, I was sure it must be the mate to the one I held in my hand.

Spurred to action, I glanced around the yard for some place safe, high enough to escape the notice of cats, where I could set the injured bird to allow it to recover in peace. The only spot I could think of was the roof of my teahouse, which was some distance away.

Cupping my other hand over my little passenger I set out across the yard towards the teahouse. As I moved up the path I felt the bird’s feet grip my finger.

Nestled in a small clearing surrounded by dense brush and moss covered pines, the teahouse seemed a good place to set an injured bird. I reached up and carefully placed it on a shingle near the edge of the low roof.

My teahouse is a small structure built of rustic redwood board and batten with a shake roof. Used more for meditation than serving tea, it is inspired by the romantic image of the isolated hut in the wilderness where the ancient Chinese recluse dwelt far from the tumult of ordinary society and all outdoors became a garden to wander freely. In the words of America’s most famous recluse, Henry David Thoreau, “I found myself suddenly neighbor to the birds: not by having imprisoned one, but having caged myself near them.”

I checked back occasionally to see if the bird was any better. It just sat there, beak hanging open and eyes glazed over. I began to doubt it would make it. I decided that if it didn’t recover by nightfall, I would bring it in and put it in a box over a heating pad.

I remembered seeing a pair of these birds, a few days earlier, as they bathed at the edge of the small pond near the house.  Plain brown, round, with no neck, and eyes on either side of their body, they were not much bigger than ping-pong balls, with perky tails that bobbed up and down as they flitted busily about. One bird would bathe while the other stood guard perched on the head of a stone stature of Kwan Yin that stands at the edge of the pond.

I was able to identify them later as “Wrentit, Chamaea fasciata.” They are a species all their own, neither a Wren nor a Tit (chickadee). Shy, reclusive and seldom seen, these non-migratory coastal denizens dwell within a one or two acre territory. They mate for life and are constant companions: grooming one another, sharing the incubation chores, and curling up together at night in what has been described as a “headless, puffed-up ball of feathers with two tails and four little feet protruding.”

As it was starting to get dark, I walked back and peered up at the teahouse roof. The Wrentit hadn’t moved.

I reached up, intending to take it into the house, when suddenly I heard a noise off to my side. On the ground only a foot or two away was another little bird. It was jumping frantically from side to side, looking up at me and emitting a rapid series of trp trp sounds that managed somehow to simultaneously communicate encouragement to its mate and alarm at what I might do. I was stunned at the depth of feeling in those odd notes.

I quickly left the scene and circled around behind a clump of trees.

A few moments later I returned from another direction. Both birds had disappeared. All that remained on the roof where the comatose bird had been was a small pile of white birdshit.

Later I was told that birds that smash into windows will sometimes abruptly come-to like that. But what stuck in my mind was the devotion of the bird’s mate.

Now, when I sit meditating in my teahouse, I frequently notice the Wrentit’s distinctive song (two notes followed by a receding burst of stacato notes) and I’m reminded of the love these little brown birds have for one another.

Humans, the strange featherless bipeds who have wreaked so much havoc on the natural world, are not the only creatures capable of deep feelings for one another. Love plays an important part in the preservation and continuance of every species. I think love serves a higher evolutionary purpose as well.

It’s been said that all love is really self-love. The Wrentit was trp, trping because he thought he was about to lose his little puff-ball. I know how he feels.

*This piece first appeared in Coast Magazine in 1996.  I posted it here so that it will go into my permanent archives.