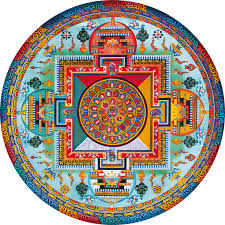 Recently, as we sat sipping tea after a short one-day meditation retreat, my friend Hugh brought up the Tibetan after-death scenario, describing in some detail how at the moment of death awareness leaves the body through an opening at the crown of the head.

Without thinking, right off the the top of my head I said, “Awareness isn’t in the body. The body is in awareness.”

If the mind is cleared of thoughts and images then awareness is expansive and boundless like empty space and isn’t located anywhere in particular. The body and all its attendant sensory phenomena arise and disappear within that awareness, not the other way around.

This is a very attractive view because it implies that our individual awareness is transcendent and even eternal, or as some say, self-existent and solitary — in which case it precedes our birth and continues on after death, beyond the bonds of material existence. When our life-stream is seen flowing through a more ultimate timeless and peaceful existence we can adopt a degree of detachment.

Despite its usefulness in practice and the comfort it provides, such a view can easily become an artificial mental-arrangement imposed on a much more subtle reality. If the mind is really emptied, “inner” and “outer” are a single awareness — both are the same wondrous Mind. Objects and awareness are inseparable and everything is spontaneously arising in the present moment.

This brings me to the “Clear Light,” sometimes referred to as the White Light because it separates out into all the rainbow colors of creation. What follows will probably end up as a episode in my memoir.

One fine morning in the sixties, in the Haight Ashbury district of San Francisco, while sitting comfortably in the half lotus on my favorite chair, an old, faded gold, recliner, I took a good dose of LSD — which in those days was at least 250 micrograms,

In keeping with my radical idealism I never locked the door to my flat. People came and went. That day my old friend Gary appeared and sat down in the Mission Oak rocker a few feet in front of me. He held a bible on his lap.

Tall and skinny with granny glasses, straight shoulder-length brown hair and a full beard, Gary had a slow meditative manner that I always admired. The two of us frequently engaged in intense, metaphysical discussions regarding the meaning of life.

An experienced astronaut of inner space, Gary had reached a point of being more at home on LSD than in the ordinary world. When he was still living with his parents, they went away for the weekend and he and a friend decided to try LSD. They drove to Telegraph Avenue in Berkeley, teeming with longhaired, countercultural types, some of whom were hawking drugs on the street. They purchased twenty hits of acid from a disreputable looking guy who assured them it was “potent shit.”

Back at his parents house they each swallowed a capsule. After what seemed like a long time (but probably wasn’t) they decided their suspicions were justified and that they’d been ripped off. Still, they did feel something. Thinking that perhaps the LSD had been drastically cut, they divided it up and took the rest of it.

Two days spent unable to see anything but swirling energy patterns convinced them that the LSD had been potent shit after all. Gary was never quite the same.

When he came of draft age the Vietnam war was raging and he worried he’d be drafted into the Army. “If it was me,” I told him, “I’d just commit myself to Langley Porter Psychiatric Institute up the hill from here (the Haight). They can only keep you three days for observation and then they have to let you go. But after that the Army won’t touch you.”

“But what if I find out I really am crazy,” Gary said.

Sure enough, when he got out of Langley Porter and had escaped the draft, his mental state gradually deteriorated, despite group therapy.

Like many desperate people, as he experienced more mental distress Gary sought solace in a highly structured religion. That’s why he had a Bible with him that day in my flat and it’s why he started talking about Jesus in a manner typical of zealous converts.

I can’t remember exactly what he said, except that hearing about Jesus triggered something deep within me, probably from my childhood when my mother had made me attend church every Sunday.

As Gary went on about Jesus, I was suddenly transfixed by an ecstatic vision — not of Jesus, but of an overpowering luminous light, both inside and outside, located above and slightly back towards the crown of my head. As it radiated down through me, time and space and the world around me took shape right before my eyes, accompanied by a rapturous elation.

When things finally returned to what passes for normal on acid, Gary was gone. I left the flat, went down the stairs and walked out the front door. Funky Page street, the sunlight through the moist air, the hills in the distance, my body as I walked in tight-fitting homespun bell-bottom pants a girlfriend had made for me, everything was transformed by a beauty so exquisite that as I drank it in my senses joined together into a single voluptuous bliss that was to linger even after I had come down from the drug.

I’d been studying the Tibetan Book of the Dead, along with the other books in that series by Evans Wentz. The intense clear light of the Mind is said to be hard to stay with after one has left the body at death, but those who had practiced and trained during their lifetime could enter it and experience supreme enlightenment. Reading and hearing about it I felt blessed to have experienced even a little of that divine light. But to tell the truth, like a lot of experiences on LSD, when I’d come down and it was gone, I couldn’t find a path back to it.

The main benefit (and danger) of LSD is that it is so disruptive. It throws you out of normal habits of mind and repetitious mental ruts. For someone who is training and striving to break out of conditioned patterns it can be like other extreme spiritual methods — opening up new possibilities for creativity and growth. But it can also be devastating for a person whose grip on reality is tenuous to begin with.

Gary’s mental illness continued to worsen and he ended up living on the streets. One day when I visited my folks in Berkeley I came upon him standing in front of Cody’s Bookstore on Telegraph, filthy and stinking, drooling and staring up into space in a kind of catatonic trance. I took hold of him and hauled him to my parents house where I got him into the tub and showered him off.

It was heartbreaking to see someone who had once been an intelligent, fairly normal person, come to such a pass. For the first (and maybe last) time in my life I sincerely prayed to Jesus to please help one of his own who was in such acute distress.

After I’d cleaned him up I tried to bring him back to reality. But he was gone, unable to even talk coherently. Not knowing where else to turn I took him to the free clinic. They couldn’t do anything for him either and suggested admitting him to Napa State Mental Hospital where he would receive some treatment. As they took him away I felt a tremendous sense of helplessness.

I visited him at Napa several times. They gave him Thorazine and other potent drugs to get him to function better. After he was released I tried to take care of him but gave up when he wouldn’t cooperate with my stringent treatment plans. Before long he was back on the streets again. Sometimes he would appear at my parents front door in Berkeley, disheveled and confused, looking for me or my brother. My mother claimed that whenever she thought of him or mentioned his name he would show up.

Over time, with help from his parents and stays in hospitals and halfway houses, Gary was eventually able to cope to a very minimal degree. But he was a shadow of his former self. The last I heard he was living in a little trailer in the desert.