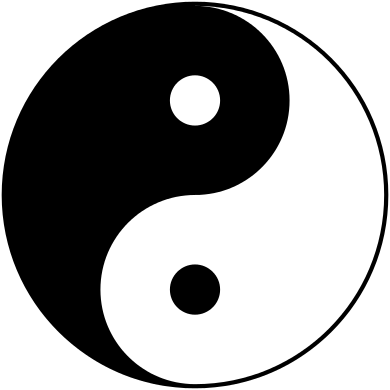 Determined to live a life of simple asceticism, in the late sixties I retreated to an isolated shack beside a pond in the foothills of the Sierras (bereft of electricity and such distractions as televisions and phones). I only allowed myself the bare minimum of reading material — books I thought weighty enough to provide for continued study and reflection.

I selected the Bhagavadgita and Lin Yutang’s Wisdom of India and China (with translations of the Dhammapada, Lao Tse and excerpts from various Buddhist Sutras). I also took a King James Bible, which I would finally read from cover to cover.

But the one book I considered most essential was the I Ching or Book of Changes.

I’d been introduced to the I Ching a few years earlier while I was living in the Haight Ashbury. A friend took me to visit Dusty Street, a DJ at KMPX, the new FM radio station that was featuring the unique music just starting to emerge from the San Francisco scene — an energetic blend of folk and blues that (when amped up some) would eventually become known as psychedelic music or “acid rock.”

After passing the requisite joint and listening to the Jefferson Airplane’s first album, which she said was just being released, Dusty took a yellow hardcover from a bookshelf. “This is the Ching,” she said solemnly, “The Book of Changes, the oracle, the oldest book in the world.”

She handed me three pennies and showed me how to “throw” the I Ching. As directed, I shook the pennies in cupped hands and then gently slapped them down on the cover of the book. Dusty examined the pennies following each of six such throws and wrote down the indicated “lines” starting from the bottom — a ritual I was to repeat countless times thereafter.

She silently consulted the I Ching for a few moments before announcing the results, “The Caldron, with no changes.” Then she handed me the book, open to Hexagram 50, Ting/The Caldron. The Ting, a bronze food vessel used in ancient Chinese ceremonial meals, is said to represent the spiritual nourishment dispensed by sages and teachers — which is what the I Ching itself would come to mean to me.

Shortly after that initial encounter I purchased my own copy of the Wilhelm/Baynes translation, which would eventually be followed by several other translations. However, as is often the case with such things, that first version is still my favorite. It’s been criticized for taking a slightly Christian stance, but I think that only makes it more fathomable for Westerners like myself. Richard Wilhelm, a Christian missionary who fell under the spell of Chinese wisdom, translated the I Ching into German over the course of ten years under the guidance of a traditional Chinese sage, who died as soon as the translation was complete.

I started by reading it from beginning to end like any other book. I was intrigued to discover that in his introduction, Carl Jung, a close friend of Wilhelm, wrote that when he asked it about the forthcoming translation he also threw the Ting hexagram — a coincidence that cemented my high regard for that old Chinese book.

I still have my original, faded, yellow copy that’s starting to fall to pieces now, somewhat like me. I’ve been throwing it at least once a week, sometimes more, for over fifty years — until I’ve memorized all of the hexagrams and can consult the I Ching without referring to a text. I suspect it was originally an oral tradition that could be learned by arranging the two basic lines, yin (broken) and yang (unbroken), into eight possible “trigrams” (of three lines each) and 64 “hexagrams” (of six lines each), linked to numerous correspondences and interpretations. Over the centuries various sages composed commentaries, including Confucius.

Although it is first and foremost a book of wisdom, using it for divination is the easiest way to access that wisdom. Reading it straight through doesn’t grab you the way getting personally involved does.

I’m a diehard agnostic/skeptic when it comes to such matters and for many years my “readings” were often difficult to relate to, but as I’ve become better acquainted with the I Ching it has proven to be uncannily perceptive in many situations. I’ve acquired numerous personal associations around the individual hexagrams. For instance, in the Ting hexagram, the Caldron has come to represent the body sitting in meditation with legs tucked in and the “cooking” that takes place in one’s physical container with the application of time and heat (concentration) to provide spiritual nourishment.

Developing one’s own personal associations and interpretations is better than adopting someone else’s, especially for divination. It’s possible to use almost anything as a vehicle for channeling intuition. One could even come up with a system of divination based on something like random street signs and billboards. But the I Ching system is ideally suited for such purposes.

Plus there’s a wise old teacher in it as well.

I can’t remember for sure whether it was a dream, a vision, or an acid trip, but there I was, a lone monk walking along a rutted roadway somewhere in ancient China, when suddenly I was lifted up in a very cool, low-riding, fifties Chevy coupe, the same model as a rusting abandoned vehicle that rested on a hillside not far from my shack. Cruising blissfully I traveled over the countryside to a grassy knoll where a lone figure sat under a spreading oak tree. As I came closer I saw that he was drawing I Ching lines in the dust with an index finger. I strained to see what hexagram it was, sensing that there must be an important message for me there — that this person could be the I Ching itself.

Before I was able to make out what the lines might portend I suddenly found myself standing again at my shack by the pond.

I’ve come to view the I Ching as a teacher and trusted counselor that I can turn to, not just for guidance, but for insights into human nature and the path of meditation.

In divination it has proven to be remarkably reliable, but I nonetheless treat the advice it renders as just one of several opinions. A few years ago I needed to drill a new well on some property where I lived — an expensive undertaking in an area where many neighbors had spent thousands without finding water. I threw the I Ching about the prospect of drilling at several different locations and only one was definitely positive, with the hexagram of Abundance. Although that location would not have been my first choice, after talking to someone familiar with local geology and looking at other wells nearby, I decided to drill there. Sure enough we hit great water at just the perfect depth.

I hate to admit it, but I can think of several important situations where I ignored the I Ching’s judgement, or wasn’t strong enough to follow it, and have lived to regret it.

I prefer using plain old American pennies for throwing the I Ching. The Chinese coins with the square hole in the center, which are often recommended, strike me as contrived. Pennies are aptly symbolic, with heads (yang) on one side and in older coins an open temple for tails (yin) on the other side. Plus copper is a good conductor of energy. I’ve used the alternative yarrow stalk method but I don’t feel it works as well and it’s more labor intensive.

I get the best results when I consult the I Ching about a specific situation or course of action. I also throw it about people. When a new person enters my life the first throwing about them usually proves to be significant. However I try to keep in mind that the I Ching is a book of “Changes,” so nothing is cast in stone — quite the contrary. What appears negative at first can turn out to be positive later on. Change is the only thing we can really count on.