“Just to be alive is enough.” 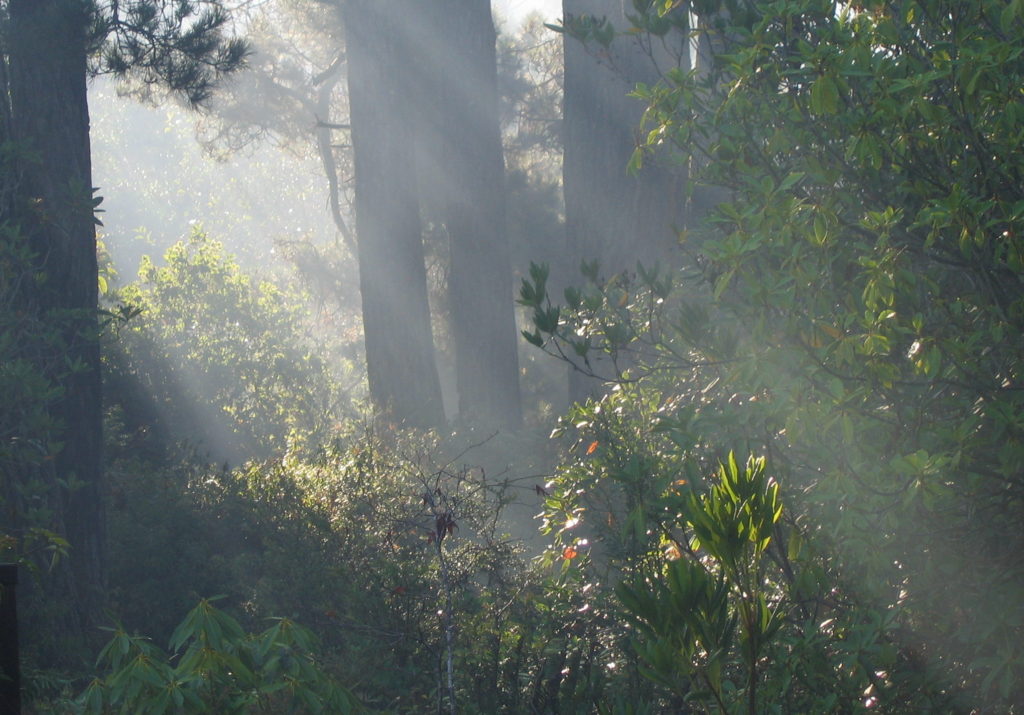 I’ve always loved walking. I walked to school as a kid and I walk to the bank or market whenever possible, or I just amble around town. Now that it’s raining here in Northern California I’ve been getting on my treadmill in the mornings, which might be boring to some (I see people reading on treadmills), but as a longtime meditation fanatic I’ve learned to get high on mindless repetitive activity. I saw a photo of the Dalai Lama on a treadmill, in his robes no less.

With an eye towards doing more walking meditation on my Sunday retreats I’ve been working on the pathways around my little meditation hut/teahouse in the woods. I added an additional loop to the trail that circles the hut so that it makes a loose figure eight (like an infinity symbol). It goes up past moss-covered pines and rhododendrons and around Huckleberry bushes under a lacy Hemlock tree. The beauty of the coastal light there, shining down though morning mist is, in a word, awesome.

Previously I’d been walking slowly around the hut three times for a total of about five minutes, between 25 minute periods of sitting meditation — Rinzai Zen style, except that they frequently walk fast. In Soto Zen, the other major Zen school, they sit for 40 minutes and walk for 10 at a very slow pace. I walk at a relaxed, somewhat slow but still normal pace (about 1 mile an hour).

In the Thai Forest tradition the monks alternate sitting for an hour with walking back and forth on a short path for an hour. I’ve practiced a little with those folks and after I got used to it, the longer periods of walking started feeling pretty good. But it’s only recently that I’ve come to fully appreciate walking meditation.

Usually to “feel empty” denotes a negative depressed state of mind. Most people find the idea of emptiness unappealing, if not downright scary — as is evidenced by the constant need to be occupied with some kind of mental activity, as if the world they’ve constructed might crumble and leave them without a mooring should the mind become empty, even for a moment.

In meditation, being empty, if not the goal, is at least the pathway and the gate.

Despite being simple and direct, emptiness is hard to fathom. The mind is devoid of mental activity, like empty space, yet not asleep or oblivious, quite the opposite — it’s totally awake and open to what is immediately present, like a clear mirror that simply reflects what is before it. The distinction between self and environment, subject and object, disappears. Everything, all concerns, are let go of and resolved in emptiness, while the immediate scene comes alive with renewed energy and brilliance.

That such a simple state is blissful and timeless would seem to defy common sense. But there it is. The whole of creation and all of time in a single place in a single moment.

Ironically, I seldom experience that kind of emptiness, or samadhi, while sitting in meditation. I’m usually too involved in a struggle to just slow down and be present. But when I’m calmly walking around the pathway between sittings, without any particular goal, my mind can open up. There’s something about the combination of inner stillness with movement. Buses and planes have the same effect on me.

You might say, why meditate at all? Why not just walk?

It’s only those sitting meditation periods, and the effort involved, that make it possible for that mirror-like experience to unfold while walking. I usually have to meditate most of the day before my walking takes on that wonderful character. It’s like cooking something — the right amount of heat and time is necessary for the food to get done.

Now when I sit in my hut on Sundays, after several hours of my usual meditation routine, I alternate half hour sits with half hour walks. What a blessing!